A Tortoise With Attitude 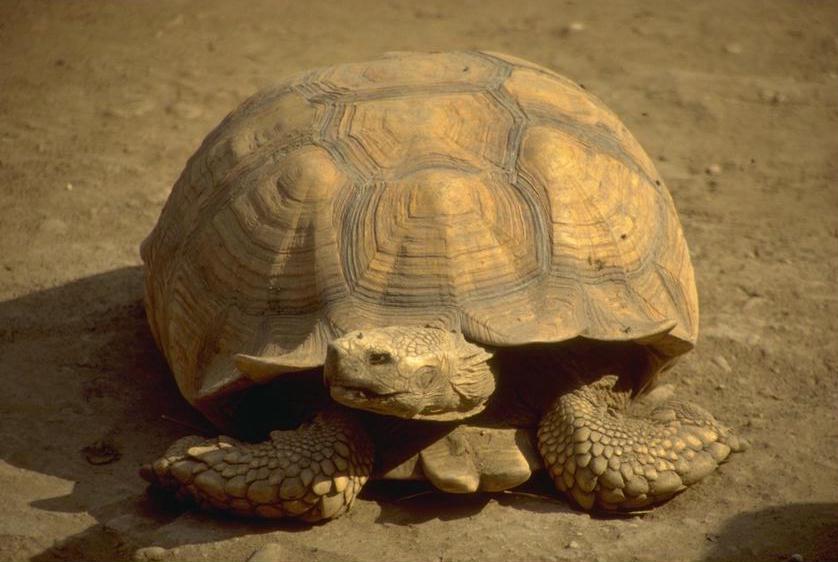 "In every man's heart there is a secret nerve that answers to the vibrations of beauty."
Christopher Morley


The Galapagos tortoise, Geochelone elephantopus, is found on the Galapagos Islands (Archipiélago de Colon) just west of Ecuador in South America. Populations are isolated on different islands, or on Isabela by impassable lava flows. The Galapagos tortoise is the largest living tortoise. It can live for up to 200 years. Galapagos tortoises can weigh over 500 pounds. Adults measure 6 feet or more from head to tail. It is a very slow-moving reptile, moving only 0.16 miles per hour. A tortoise's shell is made of bone - domed, saddle-backed, or something intermediate. Domed shells are found on tortoises that live in areas with lush vegetation. Saddle-back shells allow the tortoise to reach vegetation higher off the ground; this type of shell is more common in areas with less vegetation, particularly the smaller, drier islands. Galapagos tortoises are herbivores that eat prickly pear cactus and fruits, bromeliads, water ferns, leaves, and grasses. They have substantial water storage capacities; this enables them to survive the long arid season. Spanish explorers named the islands Galapagos (Spanish for tortoise) on account of the estimated 250,000 tortoises that inhabited the islands when they arrived. Today only some 15,000 tortoises are left, and several sub-species are extinct. Populations were severely depleted in the nineteenth century through brutal collection for stores by seamen from passing whaling ships. There is now a captive breeding program. Introduced mammals currently pose the greatest threat to the tortoises. Feral pigs, dogs, cats and black rats prey on hatchlings, while feral goats, donkeys and cattle compete for grazing. Goats have had particularly drastic effects upon the natural vegetation. The social structure of the Galapagos tortoise is a dominance hierarchy based on the height to which the tortoise can stretch its head. It matures at 20-25 years of age. Compared to most tortoises, the birth-rate of Galapagos tortoises is extremely low. Most tortoises can lay hundreds of eggs at a time; but the Galapagos tortoise only lays between 2 and 16 eggs, deposited in a hole dug by the mother. The eggs are then buried for incubation. The mother leaves, and the eggs hatch 4-8 months later. It takes the baby tortoises up to a month to dig out of the nest. The Galapagos tortoise has a good sense of smell. It sniffs all of its food before munching it. Tortoises will mate at any time of year, though with seasonal variations.